Open Tools (4): The Booklet “Writing for Research” by Raewyn Connell 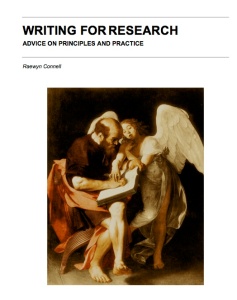 Cover of the booklet “Writing for Research”

Since starting this series, we have mostly featured openly licensed software tools. However, the booklet “Writing for Research” (PDF) also qualifies for the series. First, even though writing may be considered a form of art, academic writing is also and foremost a craft. And in a scientific discipline, where English is the common but not necessarily first language of most contributors, advice on how to best present ones ideas is invaluable. Second, Raewyn Connell, the booklet’s author, decided to openly publish it under a Creative Commons license. It is this license which allows sharing the whole book with anyone online and which makes it an ‘open tool’.

The booklet originates from Connell’s experience as a workshop instructor educating in the craft of writing for research. The first part of the booklet is devoted to writing as a (social) practice in general, looking at examples of great writers such as James Joyce:

If we can learn anything from great writers, this might be the most important point: writing is work. Like any form of work it has to be learned, and it needs resources.

In this part, Connell also identifies different genres in writing for research such as “launch writing” (for yourself, to get a research project going), “summative writing” (e.g., journal articles, books) or “outreach writing” (e.g., practitioner journals, mass media, blogs). The last section of part one is devoted to “writing in English as a second language”

The second part of “Writing for Research” provides several hands-on suggestions for writing journal articles. Connell suggests dividing up the writing process into distinct phases that build upon each other and each of which might require several iterations. In the words of Connell:

Finally, in the third part, the booklet features some writing-related issues such as time management. For instance, Connell suggests to actually schedule writing times about one month ahead. In the very last section, Connell returns to the big question of “why writing?” in the first place, before ending with some recommendations for further reading.

Throughout the booklet presents great illustrations such as the fifth version of an argument outline depicted below: 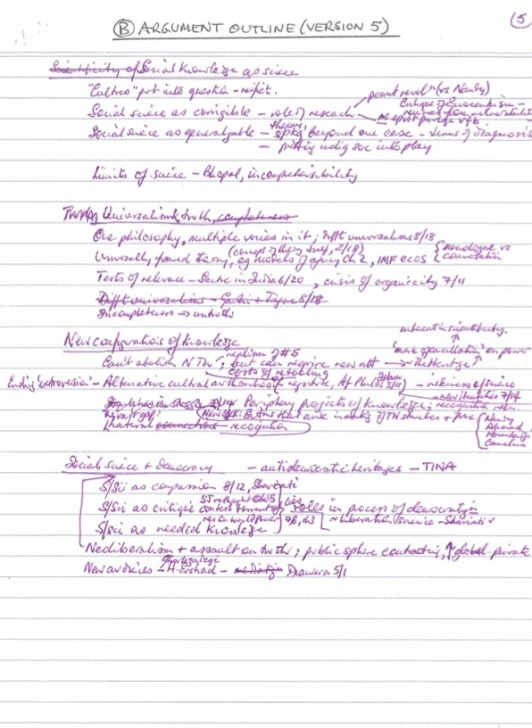 Overall, the booklet is not only fun to read but also helpful for beginners and advanced writers alike. Check it out!